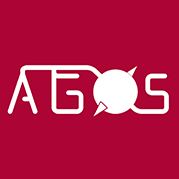 Fungal species are important pathogens for humans, animals and plants and can cause considerable damage. Major causes for the spread of fungal diseases are fungal spores. Fungal spores are specialized either for dispersal or for dormant survival. They can be produced either asexually or during the sexual part of a fungal life cycle. In the first case they are often specialized for dispersal, while in the latter case they are often produced for survival. Fungal spores come in a broad variety of shapes and sizes that are closely related to spore function. While dormant spores often utilize the mechanical stability of a ball-like shape, spores specialized for dispersal can have very distinct shapes that are adapted to the route of dispersal. Examples for such spores are the needle shaped spores of many members of the genus Eremothecium (see Figure 1 for an example).

Figure 1: Spore morphology of Ashbya gossypii.
A. A single needle-shaped spore produced by A. gossypii. The scale bar represents 5 mm. B. Schematic drawing of an A. gossypii spore, which represents the results from fluorescence microscopy shown on the right side. C. Various fluorescent-staining procedures revealed a composite spore structure. Actin staining was performed using rhodamine-phalloidin; chitin was stained with calcofluor white; chitosan was visualized using eosin Y; membranes were stained using DiOC6(3); mitochondria were stained with Rhodamine B; dityrosine-autofluorescence was observed using a CFP filter; and the position of the nucleus was detected using a strain possessing a CFP-tagged version of the histone AgHhf1. Note that, in the latter case, dityrosine-autofluorescence is also visible. The asterisk indicates the position of the nucleus. The arrows indicate the anterior side of the spore. The scale bars represent 5 mm.

The special form of these spores allows these fungi to be transmitted by insect vectors (mainly by bugs) to host plants, where the fungus can cause considerable damage. Such fungal diseases with economic impact are the yeast spot disease of soy bean caused Eremothecium ashbyi and Eremothecium corylii, and the stigmatomycosis of cotton caused by Eremothecium gossypii, in the following called by its more common name Ashbya gossypii (Wikipedia article). The molecular mechanisms underlying formation of such specialized spore forms, like the needle shaped Eremothecium spores are not well understood. To extend the knowledge about fungal sporulation onto morphological aspects of formation of complex spores, we recently established Ashbya gossypii as a model for studying the processes that lead to the formation of needle shaped spores . We found that many components of the process of spore formation described for S. cerevisiae and S. pombe are conserved. However, in contrast to the latter organisms, actin and actin regulatory proteins have a higher importance for shaping the spore and for integrity of the spore wall. The most significant example of this difference is the existence of actin cables that are connected to the SPB (Kemper et al., 2011), which help to form the tip segment of the spore (see Movie 1). These actin cables are formed by a member of the formin protein family that also localizes to the SPB. Such a structure was not known before.

Figure 2: A. gossypii sporebundle: Typical spore bundle of several spores connected via a ligament and released from a sporangium. 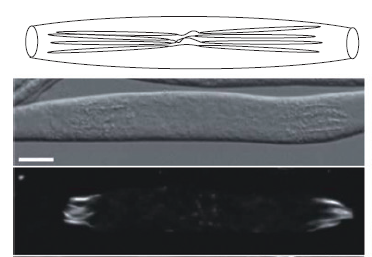 Figure 3: Spores forming in an A. gossypii sporangium. Top: schematic drawing of a spore bundle in a sporangium, middle: DIC image, bottom: actin stained with Rhodamin-Phalloidine. 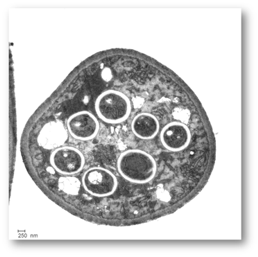 Figure 4: Electron microscopic image of a cross-section through a sporangium displaying seven spores.

Movie 1: 3D-reconstruction of an actin cable (green) lnked to a nucleus (red) in a sporangium (requires Flash-Player). The smaller red dots are mitochondria. 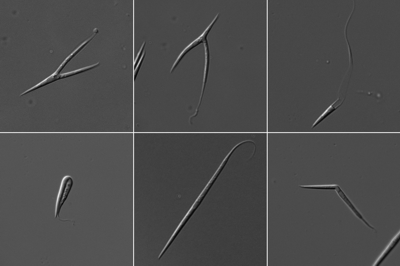 This project is in parts currently funded by the Deutsche Forschungsgemeinschaft (DFG project SCHM23883-1, see here for DFG project page).

2. The role of endocytic microcompartments in signal transduction and fast apical growth.

Maintenance of the growth machinery at one side of a growing cell is an essentiell factor for directed cell growth. Endocytosis plays an important role in keeping these proteins in place. We hypothesize that in fast growing growing cells, the speed and efficiency of this process has to be adapted to the fast growth speed. To test this hypothesis, we have started to characterize the order of appearance and the lifetime of endocytic proteins at the early endocytic site. For this purpose we have established dual-color-TIRF-timelapse-videomicroscopy of hyphal tips growing at maximum speed in cooperation with Jacob Piehlers lab. Preliminary work on fifteen proteins from the early, middle and late phase from formation of the endocytic side until scission of the endocytic vesicle revealed that, in general, the lifetime of endocytic events at the endocytic side decreases with increasing growth speed. In addition we found evidence, that in A. gossypii, a clathrin coat is not involved in early endocytic events. 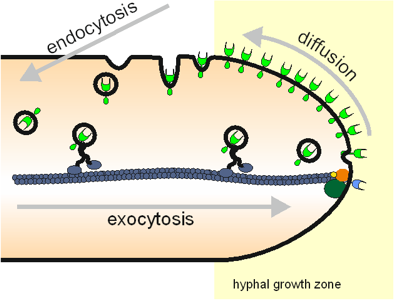 
Other labs working with Ashbya gossypii: